Editor's note: DirtonDirt.com's new DirtWire feature is a collection of quick-hitting tidbits from around the Dirt Late Model world:
May 301:53 AM ET
Posted by Kevin Kovac 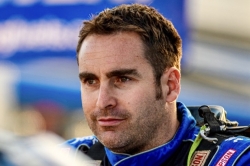 Josh Richards of Shinnston, W.Va., was hospitalized Sunday night for treatment of multiple facial injuries after he was struck in the helmet by a large mud clod during the DIRTcar-sanctioned Johnny Appleseed Classic feature at Eldora Speedway in Rossburg, Ohio. | RaceWire

Starting 15th in the 30-lap main event on a rough track surface, the standout 33-year-old driver failed to complete the first lap in his Briggs Transport-owned car before suddenly sliding to a stop in the middle of turn four. A chunk of clay kicked up from the racing surface entered the car's cockpit and struck the front of his helmet, stunning Richards momentarily and leading him to call for assistance from the Eldora safety crew.

Richards removed his helmet, climbed out of his car and walked straight to the nearby ambulance with blood visible on his face. After an initial examination in the pit area, he was transported to a nearby hospital for further evaluation.

According to his car owner and teammate Boom Briggs of Bear Lake, Pa. — who wasn’t at the track — Richards was treated for a shattered nose and three chipped teeth. Briggs said Monday that Richards was scheduled to meet Tuesday with a surgeon to determine how to procede with repairing the injuries.

Richards, who has begun to climb out of his early-season struggles on the World of Outlaws Case Late Model Series with four third-place finishes in his last five tour starts, competed at Eldora in preparation for the June 8-11 Eldora Million and Dream events. He sits fourth in WoO points with his next scheduled action on June 3 at Tri-City Speedway in Granite City, Ill.; Briggs said Monday it remains to be seen if Richards will be sidelined from competition.