Editor's note: DirtonDirt.com's new DirtWire feature is a collection of quick-hitting tidbits from around the Dirt Late Model world:
March 2711:48 AM ET
Posted by Kevin Kovac 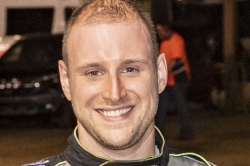 Bryan Bernheisel of Jonestown, Pa., was hospitalized after suffering neck and back fractures in a series of flips during a heat race in Friday’s Zimmer’s United Late Model Series event at Williams Grove Speedway in Mechanicsburg, Pa. | RaceWire

The fast-qualifying Bernheisel’s car bicycled into turn one, bounced hard on its wheels and then barrel-rolled multiple times over the outside fence and down an embankment. He didn't lose consciousness, but after he complained of neck and back pain the track’s safety crew cut off the rollcage of his machine and removed him on a backboard.

Bernheisel, 35, was transported by ambulance to Penn State Health Holy Spirit Medical Center in Camp Hill, Pa., where he was admitted and diagnosed with multiple fractures in his neck and upper back, though no spinal cord damage was found. It appeared that he didn't sustain a broken right wrist as initially feared, but after more testing Saturday he was scheduled to undergo surgery on Sunday to stablize his neck fracture.

A racing surface that was wetter than usual after heavy rain during the week appeared to contribute to Bernheisel’s wreck, which demolished his Lazer Chassis and likely marked the first time that a Dirt Late Model had cleared the guardrail at Williams Grove.

“The track was really sticky, so it was absolutely a traction flip,” said Jim Bernheisel, Bryan’s father and owner of his Bernheisel Race Products house car. “Everybody was like, ‘Well, did he hit a rut?’ No, he just went in, the car stuck and it took off. I thought he was gonna save it when it came down there, and then the thing bounced and took off again.”

Jim Bernheisel remarked that Bryan used all the latest safety equipment and “not a single weld cracked or broke anywhere even though the (car) is smashed horribly, so we feel like everything did its job.” He also praised the Williams Grove safety team.

It appears Bernheisel will remain hospitalized for several days following his surgery and his recovery time-table is uncertian, but the elder Bernheisel noted “it’s gonna be a long road because he was in a significant amount of pain all night and still is.”

“I’m definitely thankful for the good Lord for watching out for him,” he added. “My concern is with my son, slash my driver, but he’s my son, period, and he’s my driver as a secondary thing. But he’s also my fabricator, he’s a big part of everything we do (at BRC). They’re so intertwined. He’s still in the middle of new car builds for this year, so we have that to think about, too.”