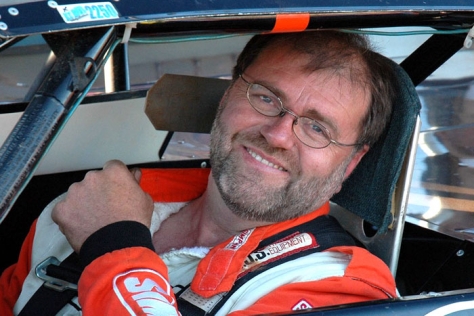 Mike Head, the larger than life Georgia racer whose orange No. 54 cars captured more than 650 feature victories across the Southeast, died at his Ellenwood, Ga., home this afternoon after a lengthy health crisis. He was 69. | Slideshow

The death of the National Dirt Late Model Hall of Famer, who last summer began treatments for a spinal lesion, was confirmed by a granddaughter, Autumn Hedgecoth.

In a successful dirt racing career that stretched from 1968 to 2011, the burly Head — built more like an NFL linebacker than a race car driver — captured championships and major victories including 1991's Southern All Star title, 1997's Rick's Furniture Racing Series title and 1990's North-South 100 at Florence Speedway in Union, Ky.

"If you wanted someone that could talk good or somebody that’s pretty, I’m not your man," the bearded and bespectacled Head told racing historian Mike Bell in 2011. "But if you want someone who can drive your hot rod on Saturday night, stop by and get me because I can do that. I can always drive a race car."

In a career that began behind the wheel of Ford Fairlanes and Chevrolet Corvairs before Late Model racing's modern era, Head won multiple championships at Senoia Raceway and West Atlanta Raceway and later branched out as a traveling, full-time driver, eventually guiding his familiar single-unit orange hauler to special events throughout the Southeast and beyond.

His $12,000 North-South victory was among the richest of a career that included other high-profile victories in the 1982 Dixie 100 at Dixie Speedway in Woodstock, Ga., and the 1988 NASCAR National Dirt Car Classic 100 at Crossville (Tenn.) Speedway. In all, Head won 24 Southern All Star features (fifth on the all-time list), nine Rick's Furniture Series features (second all-time) and six in the early days of the Hav-A-Tampa Dirt Racing Series. His final touring victory came at Talladega Short Track in Eastaboga, Ala., in 2004 and his last checkered flags came in 2011 at Senoia, where he captured the season-opening and season-ending Limited Late Model features.

Head was inducted into the National Dirt Late Model Hall of Fame in 2010 and joined the Georgia Racing Hall of Fame a year later.

As his racing career wound down, the big man with a big heart provided bearhugs in victory lane for winners of the Michael Head Jr. Memorial, a race paying tribute to his late son that served as a fund-raiser for granddaughter Kayla. The event originated at Talladega in 1998 and moved to Senoia in 2017.

Besides his son, Head was preceded in death by wife Carolyn and daughter Tammy. Survivors include daughters Kim and Jamie along with several grandchildren and great-grandchildren. Visitation is 4-8 p.m. Friday, Feb. 26, at Horis A. Ward Funeral Home in Stockbridge, Ga.; visitation continues from noon-1 p.m. Saturday with celebration of life at 1:15 followed by burial at Fairview Memorial Gardens in Stockbridge.