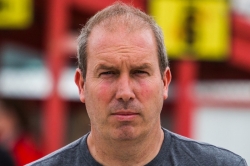 Shane Clanton of Zebulon, Ga., will miss this weekend’s season-opening World of Outlaws Morton Buildings Late Model Series Sunshine Nationals at Volusia Speedway Park in Barberville, Fla. — and potentially more of Georgia-Florida Speedweeks — after being hospitalized with Covid-19 and pneumonia.

The 45-year-old driver was discharged Tuesday following a week in the hospital and is “doing better but is very weak,” reported Clanton’s wife, Michelle, who noted that he remains under quarantine at home as his recovery continues.

A six-time career winner at Volusia, Clanton was planning to begin his busy Speedweeks schedule at the half-mile oval. He had every WoO and Lucas Oil Late Model Dirt Series scheduled for Speedweeks through Feb. 13 on his itinerary and was expected to make a decision on which national tour he would follow once the month of competition was finished; he moved to the Lucas Oil Series in 2020 but was contemplating returning to his longtime home on the WoO circuit this season.

Clanton’s Skyline Motorsports teammate, Tyler Bruening of Decorah, Iowa, is in Volusia’s field as he moves ahead with his 2021 plans.

According to Marshall Green, Clanton’s close friend and builder of Clanton’s Capital Race Cars, Clanton’s racing plans are on a “day-to-day basis” as he recovers. Green said Clanton’s “health is the number one thing of importance and, Lord willing, he will race when he’s 100 percent.”

The Lucas Oil campaign is scheduled to open Jan. 22-23 at All-Tech Raceway in Ellisville, Fla.

Clanton already had some uncertainty to his 2021 plans because his wife was diagnosed with breast cancer in the fall. Michelle Clanton’s parents, veteran Pennsylvania driver Ron Davies and his wife Cathy, have been in Georgia helping to take care of Shane and Michelle’s two young children amid Shane's sickness and Michelle's treatment.