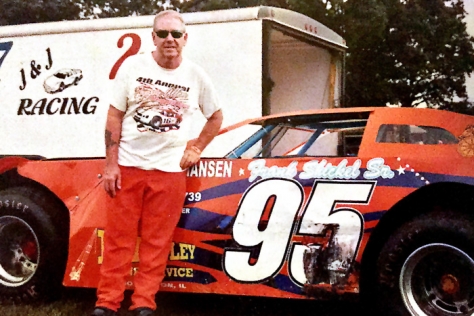 Frank Shickel, a three-time Late Model champion at Fairbury (Ill.) Speedway whose career spanned more than 50 years and established a family of racers, died Monday morning of congestive heart failure, according to the family. The Bloomington, Ill., resident was 80.

Shickel's orange No. 95 — which during one of his title-winning seasons carried this message on the dashboard: "Don't tell me how to drive it" — created a family legacy as he competed primarily at Fairbury and Peoria while also racing at Illinois tracks in Granite City, Danville, Kankakee, Farmer City and Springfield.

Making his first career start in a 1955 Chevy, Shickel's lengthy career led to Fairbury championships in 1973, '76 and '77. He made his final Late Model start in 2012 and was inducted into the Illinois Stock Car Hall of Fame in Rockford two years later, when he still had the desire to race.

"I sold my car, but if something comes along to drive, I'll drive it," Shickel told Bruce Yentes of The Pantagraph at the age of 73. "I still want to do it and I still think I'm capable of doing it."

Following Shickel's tire tracks as Late Model racers were sons Frank Jr., Eddie and Donnie, along with his grandson Flip and granddaughter Lisa. Another grandson, Devin, was a longtime crew member for Jason Feger Racing.