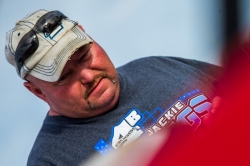 No cause of death was immediately released for Boggs, whose most recent competitive appearance came in the Oct. 16-17 Dirt Track World Championship at Portsmouth (Ohio) Raceway Park. He didn’t qualify for the feature event.

Following in the tire tracks of his late Hall of Fame father Jack Boggs, Jackie enjoyed a long, successful career in the Dirt Late Model division for 4B Motorsports. Among other achievements, he won three times on both the Lucas Oil Late Model Dirt Series and World of Outlaws Morton Buildings Late Model Series; scored 11 victories on the Mid-Atlantic Championship Series; captured four races on the STARS tour; and recorded numerous checkered flags in other regional and local events in his home area.