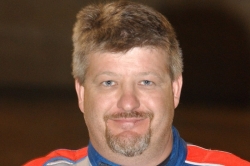 Original Rocket Chassis house car driver Tim Hitt of Weston, W.Va., a two-time Pittsburgher 100 winner and $45,000 Hav-A-Tampa Shootout winner whose frightening trip in his No. 68 over the outside wall at Cherokee Speedway became one of the sport's iconic images, died today at age 55. | Slideshow

Hitt was golfing with friends Friday afternoon when he suffered a heart attack, confirmed Rocket Chassis house car team owner Mark Richards, calling his longtime friend "a great guy to be around."

While the Rocket team has become a potent championship-winning juggernaut over the last two decades, Hitt steered the car from 1991-99 when he was more "guinea pig" than victory-pursuing driver, according to Richards then, experimenting with setups for Richards and fellow Rocket co-founder Steve Baker.

"We are all the time trying different stuff and I hardly ever go to the same racetrack with the same setup," Hitt said in a 1996 interview. "One night I might look terrible and one night I might go back to something else and be really fast. But he does that so he can help the other Rocket drivers. I don't mind, I know what my job is."

Hitt's testing role didn't prevent him from winning some of the sport's biggest races, including leading all 100 laps of 1998’s Hav-A-Tampa Shootout at Dixie Speedway in just his second trip to the Woodstock, Ga., oval. The more exciting of two Pittsburgher victories at Pittsburgh's Pennsylvania Motor Speedway came with a last-lap pass of Scott Bloomquist in 1996 worth $21,000.

Hitt later fielded cars for Carl Grover and Tim Logan before retiring after the 2004 season. He had nine career STARS victories, four MACS victories and best finish of sixth at Eldora Speedway in 10 major-race starts.

Richards connected with Hitt in the early days of Rocket with Hitt providing an engine and Rocket providing the car.

"I volunteered to work basically for nothing and he basically volunteered to drive for nothing, and we took all the winnings and built a race team over that eight-year period," Richards told DirtonDirt.com today. "He won a lot of races and we bought better equipment, better engines. It was a good relationship. It was good for Rocket Chassis, it was good for all of us. It was good for Timmy because it gave him a chance to keep racing when he got to the point where he couldn’t afford it on his own."

Hitt's impromptu exit over the Cherokee wall in 1996 at the Gaffney, S.C., oval made his Rocket look like an actual rocket as it shot high into the air, exiting the track. He won at Cherokee a year later.

"Mark (Richards) kept telling me to not let the walls scare me," Hitt said after his 1997 victory. "So I put her right up there and I could get a great run off the corners."