Editor's note: DirtonDirt.com's new DirtWire feature is a collection of quick-hitting tidbits from around the Dirt Late Model world:
May 1911:15 PM ET
Posted by DirtonDirt.com staff 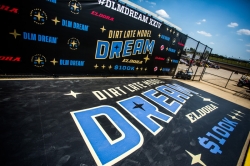 Putting Dream XXVI on hold because of coronavirus-forced restrictions on large crowds, Eldora Speedway in Rossburg, Ohio, tonight announced it would postpone the $126,000-to-win event to 2021 while formulating plans for a June 4-6 replacement event without spectators.

Officials at the Tony Stewart-owned track are working with local and state agencies regarding a proposal for an invitation-only Super Late Model event on the traditional Dream weekend with exclusive live video streamed at FloRacing.com.

The replacement event, which would be held in a “controlled and closed setting” according to the track’s announcement, would be restricted to working track and series officials, pre-approved racers and pit crews, safety personnel and members of the broadcast team. Participants would be required to follow a defined safety protocol including pre-entry medical screenings, face coverings and social distancing as the track adheres to guidance of federal, state and local health officials.

Advance tickets, including pit passes, campsites and suite admissions for the 26th Dream will be honored for June 2021’s running of the event, a race that draws one of Eldora’s biggest crowds of the season. Fans should hold all tickets, credentials, passes and receipts. Exchanges for another event will be permitted, but any tickets or campsites that are exchanged can no longer be renewed. Those wishing to exchange Dream tickets or campsites for another event should call the ticket office at (937) 338-3815 during business hours.

The 2020 season marks just the second year since 1994 that Eldora won’t host a Dream event, which launched under late track founder Earl Baltes as a $100,000-to-win event that broke the mold for Dirt Late Model purses. The only other year the race wasn’t held was in 2001 when the Dream was replaced by 2000’s rain-postponed Eldora Million.