Editor's note: DirtonDirt.com's new DirtWire feature is a collection of quick-hitting tidbits from around the Dirt Late Model world:
November 119:57 AM ET
Posted by DirtonDirt.com staff 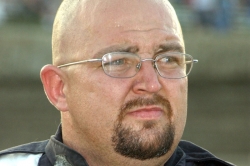 Racing out of Merrillville, Ind., Leviner was a multitime champion in lower divisions at Southlake Speedway in Crown Point, moving up full time to the Late Model division in 1999 and finding most of his success driving a Mike Kors-owned car sponsors by Southlake Dodge.

He was Indiana State Champion in UMP (now DIRTcar) weekly points in 2000 when he won five races at Shadyhill Speedway in Medaryville, Ind., while finishing third overall in UMP rookie points. Over the next five seasons he scored victories at other Indiana tracks including Lawrenceburg Speedway, where he earned a career-high $2,000 payday in the UMP Hoosier Series finale Sept. 21, 2002. He finished third in points at Crown Point in 2005, the track's final season, and retired a year later. — Stan Kalwasinski