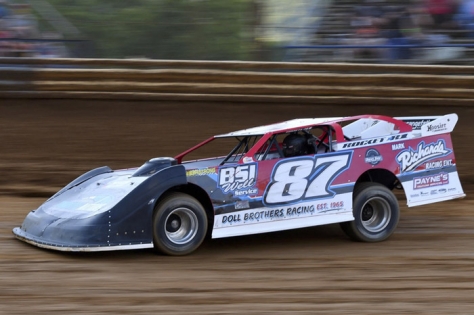 Bud Doll, a co-founder of Doll Brothers Racing that developed more than 60 years ago and fielded cars for some of West Virginia's best Late Model drivers, died Friday at Pine View Nursing and Rehabilitation Center, Harrisville, W.Va. The Pennsboro, W.Va., resident was 82.

Along with his brother Marshall, Doll officially co-founded their race team in 1963 and went on to many years of success at West Virginia and Ohio ovals for standout drivers including Earl Hill, Bob Adams Jr., Butch McGill, Gary Dalton and Derek Doll (pictured).

Charles Robert "Bud" Doll retired from Carnegie Gas Company as a mechanic with 40 years of service and was a U.S. Army veteran. Along with his brother Marshall Doll, survivors include his wife of 54 years, Connie K. Doll. A private burial will be planned at the Wilbur (W.Va.) Cemetery. In lieu of flowers, the family requests that donations be made to the Wilbur Cemetery, P.O. Box 111, Alma, WV, 26320 or the American Cancer Society, 3901 Briscoe Run Road #10, Parkersburg, WV 26104.