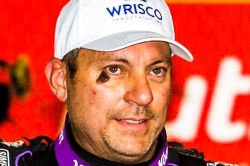 The 44-year-old racer was treated at a Mansfield hospital early in the afternoon before being taken to the Ohio State University Wexner Medical Center in Columbus, where he’s expected to undergo surgery.

“What appeared to be a fairly simple golf cart incident with a few scrapes and bumps turned out to be much more than that,” Sommer said, adding that Madden won’t compete in the Sommer-promoted Dirt Million at Mansfield, the Lucas Oil Late Model Dirt Series event carrying a total purse of more than $300,000. The team doesn’t plan on putting another driver in Madden’s car for the event that begins Thursday, Sommer said.

Madden, who joined Bloomquist’s Team Zero team at mid-season, has won five of his last six starts for $155,000 in winner's earnings with victories in the USA Nationals at Cedar Lake Speedway in New Richmond, Wis., the Sunoco North-South 100 at Florence Speedway in Union, Ky., and the Comp Cams Topless 100 at Batesville Motor Speedway in Locust Grove, Ark.

“Chris is, of course, very upset. I think that’s to be expected when everything seems to be going right, and then very quickly, the world that we live in and the higher power can remind you very quickly through things like this that you don’t always have control of things,” Sommer said, adding that the team’s “biggest priority was just making sure that Chris is being taken care of and his family was properly notified … Chris as a person comes first and foremost over the racing.”

Madden's wife Stephanie tweeted late Tuesday afternoon that she was “asking all to lift up Chris in prayer” as she made plans to fly to Ohio with Madden’s mother.