Editor's note: DirtonDirt.com's new DirtWire feature is a collection of quick-hitting tidbits from around the Dirt Late Model world:
May 212:06 AM ET
Posted by DirtonDirt.com staff 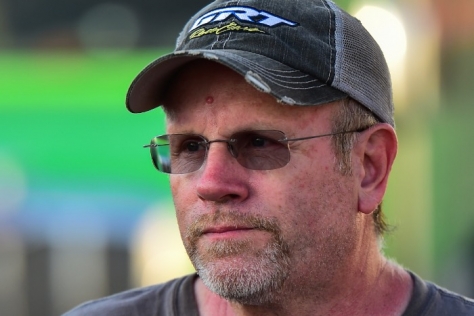 Joe Garrison, who co-founded the Garrison Racing Team in a two-car garage next to his home and developed GRT Race Cars into one of Dirt Late Model racing’s most successful chassis brands, died Wednesday evening after a battle with cancer. He was 60. | Slideshow

The death of Garrison, who has been under Hospice care, was announced by the Comp Cams Super Dirt Series, which is owned by Chris Sullivan and his brother Jack Sullivan, a former GRT house car driver.

Garrison, a 2013 National Dirt Late Model Hall of Fame inductee, co-founded GRT with his brother Mike in the 1980s and turned the Greenbrier, Ark.-based business into a brand that won many of the sport’s biggest races including the Dirt Track World Championship, Topless 100, Show-Me 100, Jackson 100, Hav-A-Tampa Shootout, Pittsburgher 100 and $100,000-to-win Dream at Ohio’s Eldora Speedway.

GRT built as many as 300 cars a year and more than 4,200 Late Models over 30 years with famed house cars driven by Bill Frye, Wendell Wallace, Clint Smith, Sullivan and others while standout racers Terry Phillips, Freddy Smith, Dale McDowell and Skip Arp also captured series titles and major events in Garrison’s machines. Curtis Gattis, Wayne Brooks, Johnny Stokes, Tony Cardin and Mike Bowers were among other early drivers of the chassis that dominated Southern racing in the 1990s while making significant inroads in the Midwest, Mid-Atlantic and other regions.

“Thirty years (ago), if you told me I was going to be up here, I’d have said you were probably dreaming,” Garrison said upon his Hall of Fame induction at Florence Speedway in Union, Ky.

During its heyday in the 1990s, GRT had as many as 20 full-time employees and more than 20 dealerships nationally while earning Manufacturer of the Year awards for several touring series and racing organizations, including the Hav-A-Tampa Dirt Racing Series, MLRA, MARS, Southern All Stars and United Midwestern Promoters (now DIRTcar).

Garrison, who working with Arp popularized the groundbreaking suspension of moving the left-rear shock behind the axle in 1998, also co-authored “Dirt Late Model Chassis Technology” with Steve Smith in 2004 and published “Dirt Stock Car Fabrication and Preparation” in 1996.

Among Garrison’s survivors are his wife Katie Garrison, who is being treated for a brain tumor at the Mayo Clinic in Rochester, Minn., and their 4-year-old daughter, Jolie. Another daughter, Randa Litton, is also among survivors along with two grandchildren. Visitation is 1 p.m. Monday, May 6, at Crosspoint Baptist Church in Greenbrier with the funeral at 2 p.m.; burial at Thorn Cemetery. Find a complete obituary at rollerfuneralhomes.com.