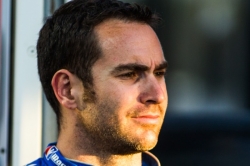 The Clint Bowyer Racing driver plans to compete with a splint on the injured thumb when the Lucas Oil Late Model Dirt Series resumes on April 5 at 411 Motor Speedway in Seymour, Tenn.

Richards, 31, initially thought he’d just jammed his thumb in a lap-40 incident during the 60-lap feature that saw him unable to avoid making contact with a spun Devin Moran, but a Tuesday trip to the doctor revealed the break. He wasn't fitted for a cast but will have to wear a small splint several weeks.

“I’ve always raced with my thumbs up on the wheel,” Richards said shortly after his doctor’s visit. “I’ve never wrapped my finger around the wheel because I’ve been paranoid of that (thumb getting stuck in the spokes of the steering wheel) happening. Normally if you know you’re gonna hit you just let go (of the wheel), but I just didn’t let go that time and it got jammed in there. As soon as I hit, I knew it wasn’t good.

“I feel pretty fortunate to have been racing for 15 years and not have that happen. There’s been a bunch (of drivers) that’s it’s happened to. It’s a pretty common deal and luckily it turned out not too bad. I’ll still be able to function. It’s gonna be a little awkward (driving with the split), but I don’t think it’s gonna be too hindering.”

Richards, who retired after Saturday's accident and finished 22nd, said his team wasn't planning to race this weekend. His crew will spend the break in competition regrouping by taking the damaged car to Rocket Chassis in Shinnston, W.Va., for some minor frame repairs.