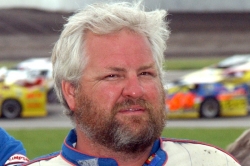 Dave Garmann of Brighton, Colo., a two-time Colorado Late Model Association, died Thursday evening after a brief battle with a rare form of kidney cancer. He was 57.

Garmann competed in the Late Model division from 2000-’17 and was a longtime fabricator on the Furniture Row team that carried Martin Truex to the 2017 Monster Energy NASCAR Cup Series championship.

Garmann, who drove the No. 4 Late Model, was a four-time winner on the CLMA tour and captured tour championships in 2004 and ’09. His D&G Racing was a fixture among Late Model and modified racers around Denver.

A celebration of life is noon April 5 at Westminster Elks in Westminster, Colo.