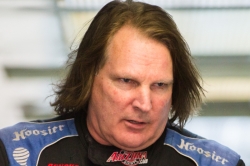 Hall of Fame driver Scott Bloomquist of Mooresburg, Tenn., was hospitalized in Daytona Beach, Fla., after suffering right leg and hip injuries in a midweek motorcycle accident that will sideline him from competition indefinitely, the team told DirtonDirt.com on Thursday.

Bloomquist, 55, was involved in the incident while attending Daytona Beach’s annual Bike Week festivities. His team reported that the impact was on the right side of his lower body and he didn’t sustain head or upper body injuries.

A Thursday evening tweet by Bloomquist’s Team Zero said he will “need some time to heal and some physical therapy to get back on track.” In addition, a team member said doctors were hopeful that he would be released to head home by Saturday.

Because of his injuries, Bloomquist, a three-time Lucas Oil Late Model Dirt Series champion who is fourth in the circuit’s standings, is likely to miss his first event on the national tour since Aug. 30, 2013, with the series scheduled for competition this weekend at Atomic Speedway near Chillicothe, Ohio, and Brownstown (Ind.) Speedway. There is no timetable for his return to the cockpit, but his team said he plans to work hard on his rehabilitation so he can be back in action as soon as possible.

The only driver in history with titles on the Lucas Oil Series, World of Outlaws Morton Buildings Late Model Series and Hav-A-Tampa Dirt Racing Series, Bloomquist has more than 600 career feature victories overall, including a series-best 93 on the Lucas Oil circuit.