Editor's note: DirtonDirt.com's new DirtWire feature is a collection of quick-hitting tidbits from around the Dirt Late Model world:
January 611:32 AM ET
Posted by Todd Turner 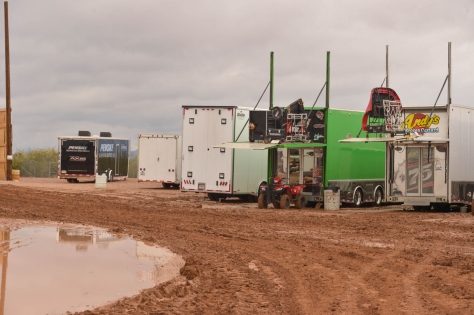 Flooded areas in the pits made the pits and staging areas inaccessible despite work to pump water out of the pit area at the third-mile oval. Officials initially announced a two-hour delay to the program on Sunday morning, but decided to postpone the event a few hours later.

Officials are considering solutions for a potential makeup race for the miniseries with Jan. 9, 11-13 events remaining.

Next up for the six-race miniseries is Wednesday’s scheduled event including a $5,000-to-win Super Late Model program along with racing action for USRA-sanctioned modifieds and X-mods. Wednesday’s hot laps are scheduled for 5:30 p.m. MST with heat races scheduled to start at 6:55 p.m..

Bobby Pierce of Oakwood, Ill., nipped Scott Bloomquist in Saturday’s Late Model opener and is in pursuit of the Keyser Quarter-Million Bonus, which pays $250,000 to any driver sweeping the six-race miniseries that continues through Jan. 13.