Editor's note: DirtonDirt.com's new DirtWire feature is a collection of quick-hitting tidbits from around the Dirt Late Model world:
December 1711:03 AM ET
Posted by DirtonDirt.com staff 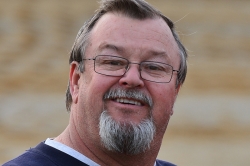 Jerry King, the owner and promoter who guided Florence Speedway most of its 34 seasons, died Monday morning at age 65. His son Josh, who took the reins of the Union, Ky., oval several years ago, reported his father’s death to DirtonDirt.com.

The elder King purchased the northern Kentucky track with wife Mona in 1984 and built into one of highest profile Late Model tracks in the country with major events including the Sunoco Race Fuels North-South 100, an annual $50,000-to-win event on the Lucas Oil Late Model Dirt Series that’s among the sport’s crown jewel events.

King and his family 11 days ago received the Mike Swims Award of Excellence at the Lucas Oil Series banquet. Josh accepted the award on behalf of the family and his father, whose failing health prevented him from attending.

“I don’t know if Florence Speedway would be there right now if not for his determination,” King said of his father in accepting the annual award for those who've gone above and beyond the call of duty in the racing industry to make a lasting impact on the lives of racers, crews and fans.

Visitation is 4-8 p.m. Friday at Stith Funeral Home in Florence; the date for a private funeral will be determined.