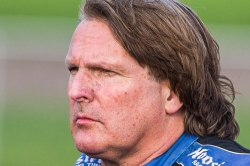 Scott Bloomquist of Mooresburg, Tenn., has confirmed his participation in the Jan. 5-13 Keyser Manufacturing Wild West Shootout presented by O’Reilly Auto Parts at FK Rod Ends Arizona Speedway, marking the first time that the Hall of Fame driver will compete in the Southwest miniseries.

The primary objective for Bloomquist will be chasing the Keyser Quarter-Million Challenge, which for the fourth consecutive year offers Super Late Model drivers a blockbuster $250,000 bonus for sweeping the six features. In addition, winning five of six features will earn a racer an extra $100,000; capturing four features offers a $25,000 prize; and topping three headliners will provide a $10,000 check.

“I think we’re at a point with our program, if I’ve ever been in a place where I think I can get out there and get it done, it’s now,” Bloomquist said in a WWS press release. “It’ll be exciting, I know that.”

The soon-to-be 55-year-old superstar watched from afar earlier this year as one of his proteges, Ricky Weiss of Headingley, Manitoba, won twice and contended for several other victories in the Wild West Shootout driving a Sweet-Bloomquist Race Car. Come the event’s 2019 edition, Bloomquist knows Weiss will be one of his prime rivals, but he’s confident he can overcome the talented Canadian — and the rest of the Super Late Model field — to collect the bonus money.

“The only thing that I might feel bad about is Ricky’s been so good out there, we want to go out there and annihilate ‘em and take that whole bonus home with us,” Bloomquist said. “I know I’m gonna have to race Ricky for it, but hopefully we’ll all be friends when it’s over with.”