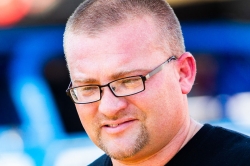 Duane Chamberlain of Richmond, Ind., was evaluated and released from a local hospital late Saturday suffering from bruised ribs he sustained in a crash during the fourth World 100 heat race at Eldora Speedway in Rossburg, Ohio.

Chamberlain, 39, hit the turn-one wall on the sixth lap of the prelim and his St. Henry Nite Club car rolled after contact from Dustin Nobbe’s car. Chamberlain gingerly emerged from the cockpit but was transferred by ambulance to the hospital after being checked in Eldora's Premier Health Infield Care Center.

“They took some chest X-rays and a CT (scan) of my head just because of my past problems to make sure everything was OK,” said Chamberlain, who has been struggling with neck pain and headaches since the spring of 2016. “My ribs are sore, but everything was alright and they released me and told me to take it easy for a couple days.”

Chamberlain believed the wreck was caused by either a blown right-rear tire or a broken water pump that sprayed water on his rear tires.

“Right as I entered the corner I felt a vibration and the back end of the car just went around into the wall and the front end slapped, too,” Chamberlain said. “I was sitting there done and (Nobbe) said he hit the water and that sent him and into me and knocked me over. He just kind of scooped me up and flipped me over.”

Chamberlain's 7-race-old car sustained frame damage and will be taken to Rocket Chassis for further evaluation. The front of the engine’s block also broke off.

Chamberlain considered entering Nov. 1-3’s World Finals in Concord, N.C., but thinks his 2018 season is likely over. His young son and daughter will compete this weekend at Little Eldora Speedway’s go-kart races and he has other impending concerns with his wife, Stephanie, who has non-Hodgkin’s lymphoma and is scheduled to undergo a stem-cell transplant that will leave her hospitalized at least a month.