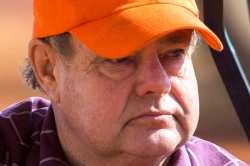 The 68-year-old Phillips underwent a CAT scan at the hospital that revealed no damage and he was “doing well” Tuesday while resting at home not far from the Eastaboga, Ala., oval.

Phillips partnered with late TST founder Alfred Gurley to turn the third-mile Alabama oval into one of the state’s most successful dirt tracks. The pair shared Racing Promoters Monthly Auto Racing Promoter of the Year honors in 2007 and were RPM’s Southeastern Promoters of the year from 2006-’08.

Talladega hosts the annual Ice Bowl each January and an array of Late Model special events, including 85 Southern All Star Dirt Racing Series events stretching back to 1989.

Phillips was inducted into the Alabama Auto Racing Pioneers Hall of Fame in January at the International Motorsports Hall of Fame just across the highway from his racetrack.