Editor's note: DirtonDirt.com's new DirtWire feature is a collection of quick-hitting tidbits from around the Dirt Late Model world:
May 2912:55 PM ET
Posted by Kevin Kovac 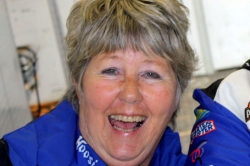 Sandy Rogers Holt, former scorer for the World of Outlaws Craftsman Late Model Series and long-time girlfriend of tour announcer Rick Eshelman, died early Tuesday morning at the home she shared with Eshelman in Phenix City, Ala., after a brief bout with a rare, aggressive form of cancer.

A native of San Antonio, Texas, who also lived in San Diego, Calif., and Little Rock, Ark., Holt, 67, was Eshelman’s loving companion for nearly 14 years. She spent more than 15 years serving as a scorer at her hometown’s East Alabama Motor Speedway and from the beginning of the 2005 season through her retirement midway through 2013 she traveled the country alongside Eshelman in her position as the WoO circuit’s head of timing and scoring.

Holt is survived by two daughters and one son; seven grandchildren; and two great-grandchildren.

At Holt’s request, there will be no funeral and no flowers. Her remains will be cremated and taken to the Gulf of Mexico.