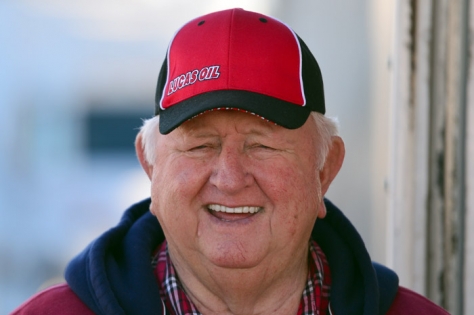 Carlton Lamm, the patriarch of Dunn-Benson Motorsports, one of Dirt Late Model racing’s longest-running and most recognizable teams, died late Monday afternoon in Raleigh, N.C., after being hospitalized in recent weeks. He was 77. | Appreciation

Lamm, who owned and operated the Dunn Benson Ford dealership, had been hospitalized since a serious health episode March 30 with #PrayforBigC hashtags prevalent on social media. His death was reported by long-time team spokesman Wayne Castleberry.

The Dunn-Benson team, typically fielding a white No. 1 entry with a red roof and decking, captured many of the sport’s biggest events, including Eldora Speedway’s World 100 with Pearson behind the wheel in 2006. Pearson won consecutive Lucas Oil Late Model Dirt Series championships for the team in 2005 and '06 following an ’04 Xtreme DirtCar title.

A powerful team through the 1990s and into the 2000s, Dunn-Benson sold out to Bobby Labonte Motorsports at the conclusion of 2006 (with Pearson along for the ride), then reformed the team late in 2014 with Pearson returning for three seasons.

Lamm was inducted into the National Dirt Late Model Hall of Fame in 2009 and Dunn Benson Ford was a frequent sponsor with the Lucas Oil Series and races in North Carolina, especially at Fayetteville Motor Speedway.

After his World 100 victory, Pearson lauded his car owner’s sensibilities. “Carlton understands racing and he knows you’re not gonna win every night. He says, ‘Boys, what do you need?’ ” Pearson said. “And then he goes out and buys it for us so we can run good. … He understands the whole game, and that makes it easier on me.”

Besides his son, Lamm is survived by wife Becky. Visitation is 5-8 p.m. Wednesday, April 18, at Skinner & Smith Funeral Home in Dunn. The funeral is 2 p.m. Thursday, April 19, at Campbell University’s Butler Chapel in Buies Creek, N.C., and burial is in Greenwood Cemetery. For a complete obituary, visit skinnerandsmith.com.