Editor's note: DirtonDirt.com's new DirtWire feature is a collection of quick-hitting tidbits from around the Dirt Late Model world:
July 81:21 AM ET
Posted by DirtonDirt.com staff 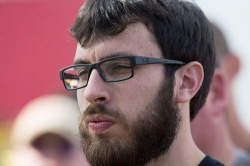 Matt Cosner of Ridgely, W.Va., Bedford (Pa.) Speedway’s winningest Super Late Model driver over the last 12 months, has been sidelined indefinitely with a compression fracture in his neck, the team announced Friday. The 26-year-old Cosner’s race car was destroyed in a May 19 rollover accident at Bedford. Lingering neck pain since the accident sent him to seek medical attention last week, and scans revealed the neck injury.

“More scans are necessary to determine if this injury has any impact on the spinal cord,” according to the report on the team’s Facebook page. “Matt’s doctors have advised him to stay off the track until we know the full extent of the damage and have a plan for recovery.”

Cosner, who has two Bedford victories this season including a $3,500 payday in June 30’s Milt Miller Tribute, had a career-best season in 2016 with nine victories overall in 32 starts, including a career-richest $5,055 payday at Bedford. He ended the 2016 season with a five-race winning streak at the half-mile oval, his home track.