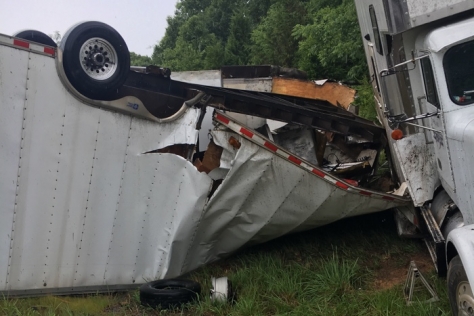 Caleb Ashby of Cunningham, Tenn., and his crewman, Jacob Dwyer, escaped injury in a Friday highway accident that destroyed his enclosed trailer and prevented him from competing in the evening’s UMP DIRTcar Summernationals event at Tri-City Speedway in Granite City, Ill.

The 26-year-old Ashby and Dwyer were driving through Princeton, Ky., about 90 minutes into a nearly 5-hour trip to Tri-City, when an axle on Ashby’s trailer broke, causing it to roll and break away from the toterhome hauler at the hitch. The trailer came to rest upside down alongside the toter on the side of the highway.

Ashby told DirtonDirt.com that while the trailer was a writeoff, his toter was only lightly hurt and his Dirt Late Model did not appear to sustain damage beyond bent bodywork. Ashby and Dwyer removed the race car and other equipment and tools from the trailer and were met at the accident site by Ashby’s brother, who drove up in a dually with another trailer to bring Ashby’s No. 61 back to the team’s shop.

“It could’ve been a lot worse,” Ashby related while on his way home on Friday evening. “Thankfully it wasn’t.”

Ashby said he is hoping to enter Summernationals events on Sunday at Tri-State Speedway in Haubstadt, Ind., and Monday evening at Clarksville (Tenn.) Speedway — with his car if he doesn’t find any further damage or a machine borrowed from his brother if his own vehicle needs more repair.