Editor's note: DirtonDirt.com's new DirtWire feature is a collection of quick-hitting tidbits from around the Dirt Late Model world:
June 1111:50 AM ET
Posted by Todd Turner 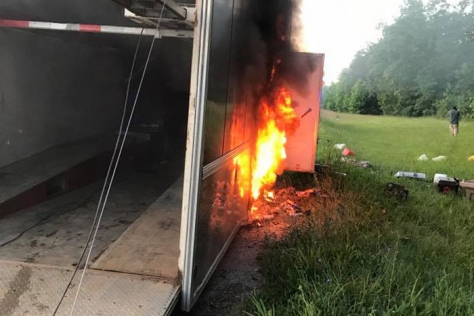 A Georgia Dirt Late Model team heading home from Dream XXIII at Ohio’s Eldora Speedway escaped serious damage and suffered no injuries Sunday morning after a wheel bearing locked up, igniting a fire in the right-side wheelwell of the team’s two-car stacker trailer.

While the team’s three fire extinguishers and a quickly-arriving police officer's fire extinguisher couldn’t put out the blaze just south of the Kentucky-Tennessee border on I-75, the Caryville, Tenn., fire department showed up 10 minutes later to extinguish the flames, said Colbert, Ga., driver Kenny Collins. The team unloaded two race cars, a pit box, fuel and other equipment as soon as they realized they couldn’t put the fire out quickly.

“We got lucky,” the 29-year-old Collins said. “Really, pretty much all we lost was the damage to the trailer and the impact gun, because it was under the ramp where it was burning … I mean, we might have lost of a couple of other tools, but other than that we got all our equipment out.

“Luckily the trailer’s all steel and aluminum, so there wasn’t any wood to catch on fire. So it was kind of contained on the right side.”

Maryville, Tenn., racer Jason Welshan and a friend brought two haulers to take the cars and equipment back to Welshan’s shop, while Collins was able to reconnect his truck to the damaged trailer and limp toward Welshan’s. He was passing through Knoxville, Tenn., shortly before noon Sunday at about 40 mph, he said.

Drew Collins, another Georgia racer and Kenny’s cousin, and Mark Wilbanks are headed to Maryville to take the race cars back to Colbert while Collins plans to drop off the trailer at Wild Side Custom Trailers in Blue Ridge, Ga., for repairs.

“We plan on running the Southern Nationals (beginning July 15), so hopefully we can get it back,” Collins said.

He was appreciative of dozens of phone calls, texts and social media connections offering help, and thinks he might’ve had a little extra help. The trailer fire was within sight of a 300-foot tall white cross alongside I-75

“Maybe somebody was watching over us,” Collins said. “It kind of blowed my mind when I seen that.”