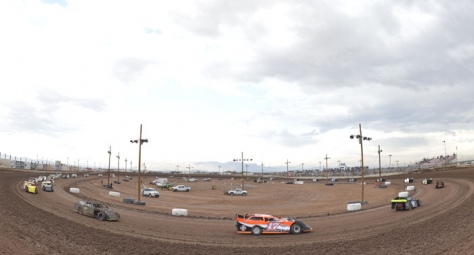 When Dirt Late Model teams assemble at the third-mile oval outside Phoenix for six nights of racing Jan. 6-14, 2018, a checkered-flag sweep of the miniseries by one driver will for the third consecutive year be worth a blockbuster $250,000 bonus. In addition, winning five of six features will again earn a racer an extra $100,000 and capturing four races offers a $25,000 prize.

For the first time, however, three Wild West Shootout triumphs will provide a driver a bonus of $10,000 for winning three times, promoters announced.

“The Wild West Shootout is the racing event in January everyone looks forward to after the off-season,” said Scott Keyser, who operates Keyser Manufacturing in Coopersville, Mich. “It has been great having the Challenge be part of the event the past two years. We decided to take it a step further this year and offer a bonus if a driver wins three out of the six races. The chances of that happening are pretty high and we couldn’t be more excited to add that extra reward to the competitors.”

Earlier this year Bobby Pierce of Oakwood, Ill., won three of the four Wild West Shootout features that were completed. Rain forced the cancellation of the final two events, however, robbing Pierce of a chance at the four- or five-victory bonuses that would have made him the first driver to collect Keyser Quarter-Million Challenge money since the program was instituted in 2016.

The 2018 Keyser Manufacturing Wild West Shootout presented by O’Reilly Auto Parts is run under the co-promotion of Chris Kearns and Kevin Montgomery. Action begins on Jan. 6 and continues with events on Jan. 7, 10, 12, 13 and 14.