Editor's note: DirtonDirt.com's new DirtWire feature is a collection of quick-hitting tidbits from around the Dirt Late Model world:
May 224:58 PM ET
Posted by Kevin Kovac 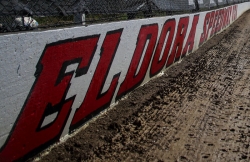 Eldora Speedway in Rossburg, Ohio, has announced safety rule updates for Dirt Late Models, adding bolt-on options for driver-side intrusion plates and a safety note on helmets from some manufacturers.

With the track’s $100,000-to-win Dream by Ferris Mowers approaching June 8-10, Eldora management released an addendum to safety rules unveiled at the speedway’s awards banquet in January and detailed in a March document.

The latest update of Eldora’s rules, which go slightly further than those developed and recommended last fall to all the division’s series, tracks and participants by the Unified Dirt Late Model Council, centers on the driver-side intrusion plate. Eldora’s January rules announcement required a welded plate, but the track will now will allow teams to use two bolt-on options as well. Images and specs for the approved bolt-to-welded tabs and bolt-on door bar clamps are included in the amended rules available on the Eldora Speedway website; also itemized is information from some helmet manufacturers on the use of correct bolts and fastening of accessories, especially after the helmet is painted or wrapped.

The Unified Dirt Late Model rules — used by such organizations as the World of Outlaws, Lucas Oil Series and DIRTcar, which sanctions Eldora’s major events — don't currently mandate intrusion plates, but an April DIRTcar bulletin noted officials will “evaluate the installations at Eldora and develop the universal specifications for driver intrusion protection that will be required” for 2018.

Eldora’s safety rules, which include updated minimum standards for modifieds and stock cars, are the result of the track’s study of incidents in recent years. Officials identified several areas where they could improve safety, including the track itself (since 2013 infield walls have been reshaped, gates updated and tire packs added); their response to accidents (addition of a third full fire truck and crew, more training for the safety teams and better insurance for participants); and equipment used by race teams (such as containment seats, head-and-neck restraints, fuel cells with foam and safety bolts on wheel cover discs).