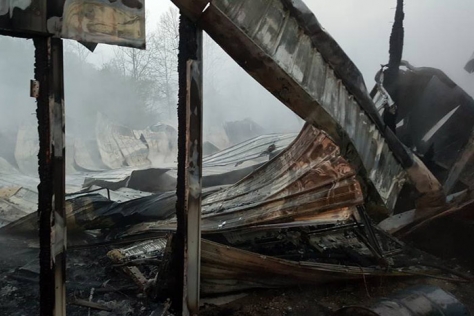 According to the Wetzel Chronicle, the Jacksonburg (W.Va.) Volunteer Fire Department responded to a call at 3:31 a.m., Sunday to find the team’s Jacksonburg shop fully engulfed in flames. Volunteer firefighters from four fire departments, along with the Folsom (W.Va.) EMS, responded to the call.

Among the losses: the team’s five-bay garage, a semi-truck, trailer, three race cars, five complete motors and every tool and gadget the Irvin and Brown racing families have acquired during years of racing. The cause of the fire has not been determined.

“There is basically no way to stop it with all the flammables inside the garage,” a family spokesperson told Wetzel Chronicle editor Lauren Matthews.

The Irvin and Brown families hope to rebuild. Supporters can aid in the effort through a GoFundMe account that has been created. The GoFundMe "Travis Brown Garage Fire" can be accessed at www.gofundme.com/3opwx7c. Donations may also be dropped off locally at Jacksonburg Pit Stop.

The team is also selling T-shirts via its Facebook page. The T-shirts, which will read “IBRStrong,” can be purchased for $15 each. Anyone wanting a T-shirt can reach the team through its Facebook page at facebook.com/irvinbrownracing.