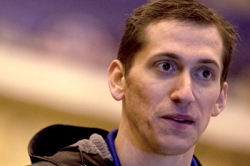 Cody Sommer, the promoter of the Gateway Dirt Nationals indoor race and newly-dirt-covered Mansfield (Ohio) Motor Speedway, survived potentially life-threatening injuries he suffered in a Sunday-night crash while driving a pickup truck around the Buckeye State oval he now oversees.

“First and foremost, we’re extremely lucky,” Sommer told DirtonDirt.com on Monday evening. “I’m pretty sore, pretty beat up. I’ve got cuts and bruises all over my body. I’ve got staples in my head. I’ve got a concussion. But I know a lot of people who have been in similar accidents didn’t have similar results, so I feel pretty fortunate. Someone was looking out for me.”

Sommer, 30, of Charlotte, N.C., was packing the track surface about 10 p.m. in a 1997 truck with Kenneth Long Jr., 53, in the passenger seat when a broken steering column caused the vehicle to veer into the turn-three wall at what Sommer estimated to be 50 mph. The truck rolled several times before coming to rest with its roof pushed down and passenger door torn free.

A track employee at work immediately called rescue teams. Both men were transported to OhioHealth Mansfield Hospital where Long was treated for minor injuries and Sommer was admitted with more serious issues, including a significant head wound.

Sommer was released from the hospital late Monday afternoon after undergoing a battery of tests and returned to his motor coach parked at the speedway. He said all signs point to him making a full recovery.

“I just remember waking up in the hospital and being told we were in an accident,” said Sommer, who was prepping the track for an upcoming test session. “It was quite a shocking experience to go through. You kind of hear people around you that were there, and they’re telling you that you were getting chest compressions because you were unresponsive (at the scene). It’s kind of a moment where you’re like, ‘Wow! How lucky am I?’ ”

Sommer said he was fortunate to be wearing a seatbelt while driving the truck. He also was thankful to his employee Jacob Nord, who rushed to scene. “He’s my man … that dude’s my man,” Sommer said.