Editor's note: DirtonDirt.com's new DirtWire feature is a collection of quick-hitting tidbits from around the Dirt Late Model world:
March 84:41 AM ET
Posted by DirtonDirt.com staff

Driver-turned-mayor calls it a career 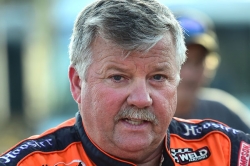 Six-time Northern Allstars champion Steve Barnett today announced his retirement from racing, in part because the possibility of injury could let down the constituents of Franklin, Ind.’s 59-year-old mayor. | Slideshow

Barnett, who had recovered from a serious back injury along with a broken nose and broken collarbone suffered in a October's barrel-rolling accident at Brownstown (Ind.) Speedway, ends a standout career that included four Brownstown championships and titles at four other Indiana dirt tracks.

A Republican caucus voted Barnett as Franklin’s mayor in January to fulfill the final three years of Joe McGuinness’s term. Barnett had been cleared by doctors to compete in 2017 but decided to hang up his helmet immediately.

“There were concerns raised by those people who did not vote for me that I could get hurt again and not be able to serve the people of Franklin,” said Barnett, a city council member for eight years who became mayor by a 14-7 vote. “It got me to thinking quite seriously about retiring from racing. Franklin is a city of 25,000 people and the decisions I make affect every one of them and I wanted to make sure I was going to give 100 percent of my time and energy to those people.”

While he was winless in the Jackson 100, the track Hall of Famer started a record 27 times in Brownstown’s biggest race with five podium finishes. Barnett was the 1993 STARS Rookie of the Year and earned a career-high $20,000 at Eldora Speedway’s 1997 Dream for a dramatic runner-up finish to Jimmy Mars in Rossburg, Ohio.

“It’s tough, really tough,” Barnett said. “To do it for as long as I have I am extremely grateful. I want to thank all the fans for their support. I had a great time racing all of those years at Brownstown Speedway there are a lot of great memories racing against some great drivers.” — James Essex