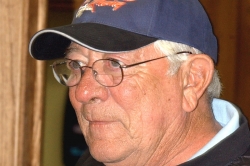 Ralph Capitani, the visionary Knoxville (Iowa) Raceway promoter and race director who brought a major Late Model event to the sprint-car stronghold, died Monday at age 84. The cause was cancer, according to National Speed Sport News.

The National Sprint Car Hall of Famer known as “Cappy” spent 44 years elevating Knoxville to its perch as one of America’s top dirt tracks, continually growing the track’s high-profile Knoxville Nationals for sprint cars and in 2004 adding the Lucas Oil Late Model Knoxville Nationals at the half-mile showplace.

“This is a sad day for Knoxville, Iowa, Knoxville Raceway and all of sprint car racing as we’ve lost Ralph Capitani,” according to a statement from the track. “A visionary in the sport, Cappy aimed to make sprint car racing at Knoxville Raceway grander, the purses bigger and the grandstands fuller. He achieved them all with a smile on his face and a hearty handshake for every team owner, driver, crew member and fan that ever crossed his path.

“Cappy was a great mentor to everyone who had the privilege of working with him, whether here at the track or at Knoxville High School where he taught and coached. It may be a cliche, but in this case saying Cappy made Knoxville Raceway a better place could not be more accurate.”

He first joined the Marion County Fairgrounds staff as a part-time secretary in 1967 and replaced P. Ray Grimes as the dirt track’s race director in 1978, beginning a career that three times netting him sprint car Promoter of the Year three times. While most of his focus was on the open-wheel division, he was determined to build his Late Model race, which continues to pay $40,000-to-win annually as a crown jewel event.

“We’re committed to making this one of the premiere events in dirt track Late Model racing,” Capitani said in the race’s second season in 2005. “We’ve done that with the Knoxville Nationals for sprint cars and we feel we can do the same thing with these cars. It just takes time to build it, but it won’t happen overnight.”