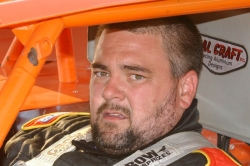 The second-generation driver of the No. 46 who raced out of Russell Springs, Ky., competed for nearly 25 seasons at Kentucky tracks and frequently with the Battle of the Bluegrass from 2002-’04. He was the tour’s Rookie of the Year runner-up in ’04 and had a best career series finish of fifth on July 24, 2004, at Soggy Bottom Speedway in Morgantown, Ky.

After his driving career ended a dozen years ago, he crew-chiefed for fellow Kentucky racer Whitney McQueary and others. The Somerset, Ky., native previously worked at Fruit of the Loom.

Survivors include his wife Denishia and two sons, Evan and Matthew. Visitation is 5 p.m. Friday, Jan. 27, at H.E. Pruitt Memory Chapel in Jamestown, Ky.; funeral services are 10 a.m. Saturday, Jan. 28 at the funeral home with burial in Jamestown Cemetery. Visit pruittfuneralhome.com for a complete obituary.