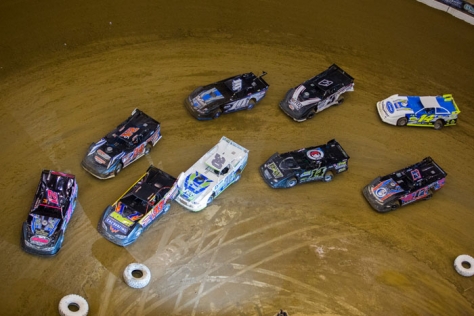 In the wake of a blockbuster inaugural last month, the VP Racing Fuels Gateway Dirt Nationals at The Dome at America’s Center in St. Louis, Mo., will return for a second edition on Dec. 14-16, promoter Cody Sommer announced this afternoon.

The weekend will grow bigger and richer in 2017 with the Super Late Model program expanding to a pair of $5,000-to-win and $500-to-start features Friday while Saturday's finale pays $30,000-to-win (up from $20,000) with at least $2,000 to every starter. In addition, a $5,000-to-win Super Late Model Race of Champions — an invitation-only event that will include ’16 Gateway Dirt Nationals winners Scott Bloomquist and Shannon Babb — will be part of Thursday’s preliminary card.

Notably, the 2017 event will have a cap of 150 Super Late Model entries and only one round of time trials Thursday. No drivers will be eliminated after Thursday’s action on the temporary fifth-mile oval on the stadium floor; the field will be split into two groups from qualifying results for Friday’s twin-feature program.

“Many things were learned last year in a first year,” Sommer said in a press release. “We had a lot of things to figure out, and when the curtain closed it was obvious that the event was very successful but not perfect. Racing was phenomenal and the fan experience was very high, but there is always more that can be done. The changes for 2017 will only continue to build the event and cater to racers and fans alike.”

Sommer said the weekend’s total purse distribution for Super Late Models and open-wheel modifieds, which will run for $5,000-to-win Friday and $10,000-to-win Saturday, will increase by more than $100,000 from 2016. That includes $30,000 in tow money earmarked for non-qualifiers. More information is available at www.gatewaydirt.com.