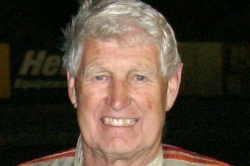 One of the longest-running dirt racers in the country who was long ago nicknamed “The Sundrop Kid,” Damitz was a multi-time track champion at several California racetracks, including Antioch in recent years.

“I’ve never been a hard charger but as long as me and the car worked together, we were always pretty fast,” Damitz told National Dirt Digest at an Arizona event in 2006. “I’ve been that way my whole career, and it’s just my style.”

Damitz crewed for fellow California racer Paul Guglielmoni at the recent Keyser Manufacturing Wild West Shootout in Arizona, his last visit to the racetrack. He was an inspiration to young and old alike.

“Some of the older guys look at me and I’ve heard ‘em say, ‘If he can do this stuff at his age, then why can’t I?’ ” Damitz said in ‘06. “Maybe it’s an inspiration to them in that way, but really it’s not that difficult to keep racing when you’ve done it so long. It might be tougher for a guy to start racing at my age, but as long as you’ve constantly been doing it for so many years, it really isn’t a big deal.”