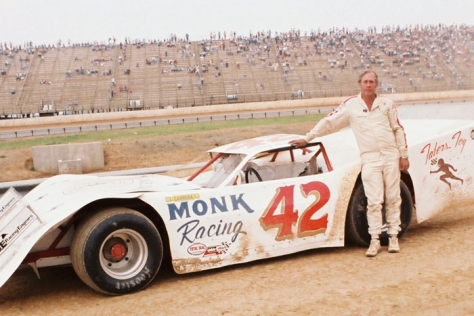 Hall of Fame driver Doug Kenimer, the winner of the 1977 World 100 and a wide-traveling racer who piled up more than 450 career victories, died Monday. The Dahlonega, Ga., resident was 71.

Kenimer, who led the final 70 laps of Eldora Speedway’s eighth annual World 100, had three top-five finishes in five starts in Dirt Late Model racing's most prestigious event. He finished second in 1976 to fellow Georgia driver Charlie Hughes who, like Kenimer, surprised competitors by outracing them with a small-block engine.

Kenimer, whose racing career on dirt and asphalt spanned 38 years, finished fifth in the inaugural season of the National Dirt Racing Association in 1979 and scored his lone career NDRA victory in 1983 at Paducah (Ky.) International Raceway. He was a frequent winner at Georgia ovals — Rome Speedway, Woodstock’s Dixie Speedway and Senoia Raceway among them — while other major victories came at tracks in Topeka, Kan., Ionia, Mich., Newport, Tenn., and St. Clairsville, Ohio.

He also captured the finale of the first-ever Late Model Winternationals at East Bay Raceway Park in Gibsonton, Fla., an event that blossomed into the heart of dirt racing’s Florida Speedweeks.

Kenimer was inducted into the National Dirt Late Model Hall of Fame in 2005 and a 2012 inductee into the Georgia Racing Hall of Fame.

Robert “Doug” Kenimer was a self-employed developer and is survived by a son and two daughters along with six grandchildren and two great-grandchildren.

Visitation is 2-4 p.m. and 6-8 p.m. Wednesday at Dahlonega Funeral Home and again Thursday at noon until the 2 p.m. funeral. Interment will follow service at Wahoo Baptist Church cemetery. For a complete obituary, visit dahlonegafuneralhome.com.