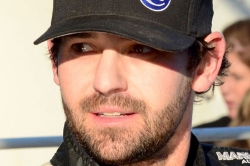 Lucas Oil Late Model Dirt Series regular Jared Landers of Batesville, Ark., who missed the second half of the 2017 season after suffering a torn carotid artery in a July accident, hopes to return to action for February’s Georgia-Florida Speedweeks, the team announced today.

A specialist at the Cleveland Clinic examined Landers on Monday with the news that his internal neck injury is healing successfully.

“Basically he said that, while I’ll always have a big of a scar where the injury was on my carotid artery, that things have healed nicely,” Landers said in a team release. “Most important to me, he said that he wants to see me back here in a few months for one more round of tests, but that he doesn’t currently see a reason that I can’t return to action in time for Speedweeks.”

Landers walked away from a wild, flipping accident at Tri-City Speedway in Granite City, Ill., but the extent of the neck injury wasn’t discovered until a month later, shortening a season that included two Lucas Oil victories and a Dream preliminary triumph at Ohio’s Eldora Speedway.

“To say I’ve been on pins and needles for the past five months now would be a giant understatement,” Landers added. “As a racer you just sit there and think ‘What am I going to do to support my family if I can no longer race’. Then you are also thinking my family absolutely comes first, so there’s no way I can get back in a car if the doctors aren’t confident that I’ll be safe doing so.”

Landers and his team will focus on getting prepared for Feb. 10-11 Lucas Oil action at Golden Isles Speedway in Brunswick, Ga., that precedes six nights of action at East Bay Raceway Park in Gibsonton, Fla., on Feb. 13-18.

“My family, my sponsors, and my fans have been nothing short of incredible through this whole ordeal,” Landers said. “I feel like I’m more focused than ever before on my life and my racing career, and I can’t wait to get back on the track.”