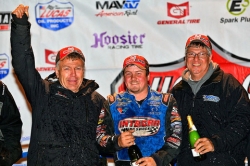 In the wake of the younger Richards's shocking departure from his father’s iconic No. 1 machine last week to race for Eric Brock’s Best Performance Motorsports — the St. Marys, Ohio-based operation that employed Sheppard in 2016 — Mark Richards made the decision to bring Sheppard back into the Rocket fold. The 23-year-old standout previously drove the house car in 2012 after Josh headed south to pursue NASCAR opportunities and early in ’14 when Josh was sidelined by nerve issues in his hands.

“There’s a lot of good drivers out there, but Brandon is the one that fits the spot the best for us,” Mark Richards told DirtonDirt.com. “He’s been a Rocket customer now for quite awhile, we’ve worked with him in the past, he fits well with all of our sponsors and he’s one of the top 10 drivers in the country. He’s what we’re looking for in a driver.”

A former UMP DIRTcar Summernationals champion and two-time Dirt Track World Championship winner (first in ’13 in a one-race cameo behind the wheel of the Rocket house car), Sheppard returns to the elder Richards’s effort after steering the Best Performance cars to a fourth-place finish in the 2016 Lucas Oil Late Model Dirt Series points standings. He left Brock’s team after winning last month’s DTWC and planned to run the Lucas Oil tour in ’17 in family-owned equipment, but his reunion with Richards will make him a regular on the World of Outlaws Craftsman Late Model Series instead.

"I can't express how excited I am to have this opportunity with Mark and Steve (Baker) at Rocket Chassis,” Sheppard said in a Rocket press release. "It truly is an honor to sit in the blue No. 1, and I’d like to thank Mark and Steve, along with Valvoline, Seubert Calf Ranches and the other marketing partners, for having the confidence in me to represent them."

Richards said all his team’s sponsors are back for ’17, including Valvoline and Seubert Calf Ranches, and Gunter’s Honey has joined as a new backer. His crew will feature 2016 WoO crew chief of the year Danny White and two new hires — former World 100-winning crew chief Austin Hargrove and young mechanic Joel Rogers — and their schedule will largely mirror that which Josh ran in ’16.

“We’ve got a year invested in Brandon (from his previous stints driving the house car) and he’s gone out since then and gained more experience and become a more seasoned, experienced driver,” Mark Richards said of Sheppard, who finished sixth in the ’15 Lucas Oil points in his first season on a national tour. “I think Brandon is in a position right now where he’s ready to take advantage of putting his experience together with a good team.”