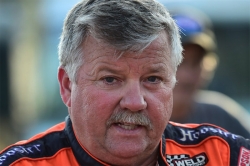 The 59-year-old Barnett was being treated after being airlifted to an Indianapolis hospital after the wreck during preliminaries for Ultimate Battle of the Bluegrass Series competition, according to family reports on his Facebook page. Injuries weren't life-threatening but he was expected to be kept overnight for further tests, the track announced.

Before family members were able to visit with him, doctors reported Barnett was conscious and talking and moving all his extremities, his daughter Mindi Barnett Paris wrote on Facebook.

“The doctor said that he was mad at them for cutting off his $900 race suit, so that's a good sign,” she posted on social media. “Thank you all for prayers and thoughts. He is a tough old man.”

Barnett's car violently barrel-rolled over the banking in turns one and two in an incident that also involved Jeremy Hines and Adam Bowman. Barnett's car came to a rest upside down.

Barnett is one of Brownstown’s all-time winningest drivers and a member of the track’s Hall of Fame. He won Late Model championships in 1990, ’02, ’07 and ’09.