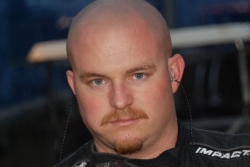 Long-time dirt racer Chesley Dixon of Swainsboro, Ga., suffered burns over 54 percent of his body in a Saturday evening racing accident at Swainsboro Raceway, according to his wife Bridget Dixon.

Dixon, 32, was airlifted to the Joseph M. Still Burn Center in Augusta, Ga., with first- and second-degree burns on his back side from his shoulders to his ankles, along with some areas on the front of his legs and arms. He’s scheduled to undergo surgery Monday.

Doctors are also keeping close tabs on his lungs and breathing because Dixon inhaled smoke along with exhaust from fire extinguishers, Bridget Dixon said.

“He is in good spirits and resting,” Bridget Dixon said in a text relayed by DirtonDirt.com contributor Kelley Carlton. “We do appreciate all the calls, texts and prayers from everyone. The support has been overwhelming. Please continue to pray for him.”

Dixon’s familiar No. 3 was involved in a fiery crash with Blake Smith just past the halfway point in Saturday’s Crate Late Model feature. Dixon’s car ended up on its roof and suffered severe damage. Photographs show the residue of emptied fire extinguishers. Smith was apparently uninjured.

Dixon is in his 11th season of Late Model racing. Among his victories in 2016 are a pair of $5,000 triumphs at Swainsboro.