Arkansas driver Floyd back in action 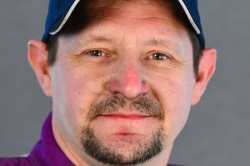 A stalwart regional touring driver with the MARS DIRTcar Series and Comp Cams Super Dirt Series through much of the 2000s, Floyd, 48, put his racing career on hold after the 2013 season — one year short of his 30th behind the wheel — while going through a divorce. He sat out the ’14 and ’15 campaigns but this year got the itch to return and has a Hatfield-powered Bob Pierce Race Car ready to make a late-season comeback in preparation for a full season of racing in 2017.

“I’ve raced since I was 16 years old and been around racing all my life with my dad racing,” said Floyd, who last year began working full-time for his father’s business, Floyd’s Body Shop, after backing away from regular operation of his own JFR Graphics enterprise. “I kind of enjoyed it a little bit not having all the hard work and rush to get a race car ready for a couple years — it’s nice, once in a while, to sit back and relax.

“But that didn’t last very long for me. I was lost … I just felt like I should be at a racetrack. I finally told my dad after everything kind of got straightened out, ‘I gotta get my stuff going. I don’t have anything to look forward to.’ ”

With help from friends and more than a half-dozen sponsors, Floyd was able to assemble a modest effort to close out the 2016 season in hopes of coming back stronger next year.

“It’s kind of late in the year so I thought, Well, I’ll just wait and debut the first of ’17,” Floyd said. “But I kind of wanted to go out and shake this car down — it’s not a completely new car, but it’s new to me — so that way I can work over the winter and have a little bit more knowledge about it and know what I need to do. I’m excited to get back in the car and see what I can do.”

A two-time track champion at West Plains, Floyd plans to shake off his driving rust by running in the 3/8-mile track’s weekly programs through the end of September, though he does also expect to enter the Sept. 2 Comp Cams-sanctioned event at Crowley’s Ridge Raceway in Paragould, Ark.