Editor's note: DirtonDirt.com's new DirtWire feature is a collection of quick-hitting tidbits from around the Dirt Late Model world:
August 1010:37 AM ET
Posted by Ben Shelton 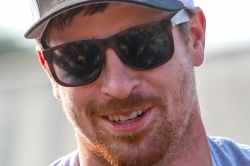 Dirt racer Austin Hubbard of Seaford, Del., is expected to miss the rest of an injury-filled season while recovering from surgery for a broken left ankle sustained in a passenger-car accident last month, the team announced.

The 24-year-old Hubbard, 2010’s Rookie of the Year on the World of Outlaws Craftsman Late Model Series, was briefly out of action after a late June ankle injury suffered in a rollover wreck at Lernerville Speedway in Sarver, Pa., then experienced another accident in a rental car he was driving July 7 after a rainout at Fayetteville (N.C.) Motor Speedway left him with a broken ankle, torn muscles and several lacerations.

Hubbard, whose rental car slid off a slick North Carolina back road and hit a tree, underwent July 18 surgery where two plates and 11 screws were put in his ankle to help it heal. He’ll be in a cast for a month and then will go through rehab. He’s supposed to be back to normal activity by January.

The racing season Hubbard jokingly describes as a “big nightmare” is over, although he’s entered in Dec. 15-17’s inaugural VP Racing Fuels Gateway Dirt Nationals at the Dome at America’s Center in St. Louis, Mo. The progression of his recovery will determine whether he competes.

“As bad as everything’s been I know that it could’ve been much worse, so I’m thankful to still be alive and kicking,” Hubbard said in team release. “I do want to thank everyone who has sent me words of support and encouragement during this tough time. They’ve really meant a lot. Right now I’m just focused on getting healed so that I can get back to normal life and racing again.”