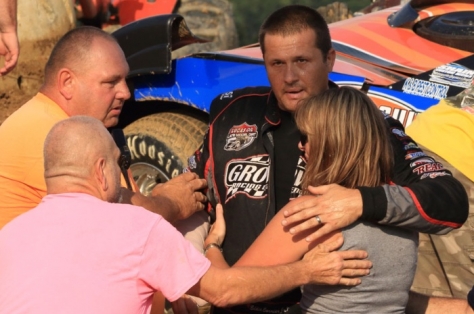 The 45-year-old Carrier’s Jake Keaton-owned car was too high entering turn three and slid sideways at the top of the banking, bounding into the air after the car’s right-side door smashed tire barriers and concrete. He was treated and released at a nearby hospital

Carrier is expected to be out of action six to eight weeks following Wednesday's scheduled surgery, according to Facebook reports from the team and his wife Jamie (pictured with her husband after the wreck). He had no other injuries.

Carrier began driving for Keaton after he recently ended a 13-year collaboration with long-time car owner Carl Grover, who fielded Carrier’s biggest victories including the Hillbilly 100 and North-South 100.