Editor's note: DirtonDirt.com's new DirtWire feature is a collection of quick-hitting tidbits from around the Dirt Late Model world:
July 2511:07 AM ET
Posted by Alli Collis 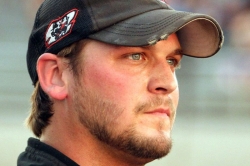 According to a post on his Facebook page, the 29-year-old Wenger was involved in a first-lap pileup and his wrist was injured when his car was struck in the left-front wheel, quickly turning the steering wheel. While Wenger was able to finish the race, finishing fourth, he later posted that incident had resulted in a broken wrist and that he plans to see an orthopedist today.

Wenger has nine 2016 victories at five Illinois tracks, including three at Farmer City and two on the Midwest Big 10 Series.