Editor's note: DirtonDirt.com's new DirtWire feature is a collection of quick-hitting tidbits from around the Dirt Late Model world:
July 248:48 AM ET
Posted by Kevin Kovac 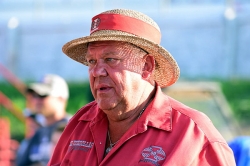 As the starting field for the sixth annual Silver Dollar Nationals rolled toward the track Saturday night, I-80 Speedway promoter Joe Kosiski (pictured) announced the 2017 event would pay $50,000, then amended that before the green flag flew to $53,000, a winning purse mirroring the No. 53 he drove during his Hall of Fame racing career.

The total more than doubles the winning purse from the event’s original $25,000-to-win payout in 2011 and marks a hefty increase over the $40,000 won by Jonathan Davenport of Blairsville, Ga., at the conclusion of Saturday’s 80-lapper.

Kosiski announced that Omaha-based Imperial Tile pledged sponsorship to boost the 2017 purse for one of the premier events on the Lucas Oil Late Model Dirt Series, along with the track adding more than $10,000.