Editor's note: DirtonDirt.com's new DirtWire feature is a collection of quick-hitting tidbits from around the Dirt Late Model world:
May 69:03 AM ET
Posted by Kevin Kovac 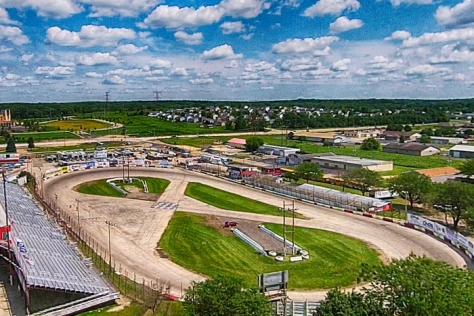 The World of Outlaws Craftsman Late Model Series is set to be part of a historic early-summer event at Rockford (Ill.) Speedway, a venerable quarter-mile paved oval that will be covered by an estimated 200 truckloads of clay to host the first dirt-track action in its 69-year history. | Story

“This was kind of like the alignment of the stars, so to speak,” said World Racing Group president Tom Deery, whose family owns and operates the track that's 90 miles northwest of Chicago near the Wisconsin border. “It happened basically after a conversation with my family and then a conversation with the Craftsman (Tools) folks about an opportunity to have a race close to their office. I think it’s 55 miles from Rockford to (Craftsman parent company Sears Holdings Corporation’s) world headquarters (in Hoffman Estates, Ill.), so putting dirt down for the first time at Rockford is a perfect way to bring the World of Outlaws to the new series sponsor.”

A UMP DIRTcar Summernationals event set for June 30 at La Salle (Ill.) Speedway will be rescheduled to make way for the 50-lap, $10,000-to-win WoO Late Model special, though the Rockford date won’t carry a WoO-Summernationals co-sanction like subsequent holiday weekend events in the Midwest on July 2 at Federated Auto Parts Raceway at I-55 in Pevely, Mo., and July 3 at Lincoln (Ill.) Speedway. The regular WoO race format will be used at Rockford.

A new date for La Salle's Summernationals program is expected to be announced on Monday.

Racing for the Badger Midget Association will accompany Rockford’s June 29 WoO Sprint Car show while a support division for the June 30 WoO Late Model card will be announced.