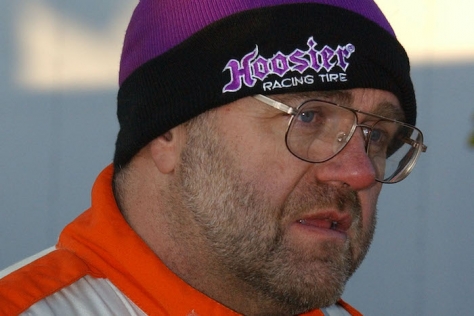 I'll never forget my first thought when I first saw Mike Head: "He looks more like a professional wrestler than a race car driver."

But the Ellenwood, Ga., driver was indeed 100 percent racer, one of the Southeast's best Dirt Late Model competitors for nearly two decades. | Slideshow

He was a mountain of a man. When I shook his hand, it felt like his wrapped around mine twice. He looked intimidating, but he was one of the kindest, gentlest people I've known.

Early in his racing career, which stretched more than 40 years until 2011, he was just as intimidating inside the race car as he was standing next to it in the pits. His signature orange, black and white scheme and iconic No. 54 were present from his earliest days on Georgia racetracks. Head was a staple of Atlanta-area tracks, including Dixie and Rome, where announcer Jimmy Mosteller tabbed him as “the Headman.”

I remember seeing Head's unique all-in-one orange toterhome at Dixie Speedway’s Hav-A-Tampa Shootout as a young fan. It was the first time I'd ever seen a truck like that, and I thought it was the coolest thing on the planet. Imagine how amped I was several years later when that familiar hauler rolled through the gates of Laurens County Speedway, my home track, for the first time in 1999. Working at the Laurens, S.C., track as a flagman, I met Mike Head later that night and I immediately knew he was the real deal. Little did I know on that May night just how much time I'd be spending with the Headman in the coming seasons.

I began working with Southern All Star Racing Series that same year and quickly came to know Head as one of the tour's main faces. He was a former champion, but more importantly he was an avid supporter. He never missed a race and was quick to sing the praises of legendary tour founder B.J. Parker.

As I spent more time with the series, I learned the tragic story of Head’s son Michael, who was murdered in a 1997 robbery in Atlanta. My friend Tim O'Brien developed a memorial race to benefit Michael's family, and I was privileged to be a part of the event for several years.

It quickly became one of my favorite races. Head's speeches at the drivers' meeting were incredibly emotional. Headman spoke on the microphone, his voice cracking on every other sentence, and thanked every person and company that participated. His honest raw emotion made him tower that much taller in my mind.

In the last few seasons of Mike’s career, it wasn’t a secret that he was struggling to make it to the next track. But somehow, he would always find a way. Just like a lot of other great drivers of the day, the financial burden of racing had become difficult to manage with limited sponsorship. But continuing the sport he loved, Head kept plugging along race to race along with his beloved wife Carolyn right there by his side.

In the wake of Michael’s murder, Head became a godly man who coveted family and friends more than any race trophy. Don’t get me wrong. He still wanted to win races and he raced hard.

I tell the story often that the next time the series came to my home track, all of the regulars came to my house just a few miles from the track. Headman and my dad spent all afternoon sitting in my backyard swing talking and laughing. My dad had fond memories of that day.

Later that night, Head was leading the race and broke with only a few laps left. As I was making my rounds at the end of the night, I walked over to Mike who was standing at the back of his hauler. I expected a somber greeting, but when he looked up and saw me coming, the burly Head's electric smile immediately appeared. He started thanking me for a great time and a good meal. He told me how much meeting my dad had meant to him. He didn’t utter a single negative word about how the race had gone for him. He relished in the good things of the day.

I've thought about that day many times over the years. About how that man reacted to adversity and focused on the good things. And though I fall far short of it on many days, I've tried to do that in my life: Look for the good and find the positives. That was the influence he had on my life. And he affected so many others with his warm spirit and his tender kindness.

You'll find it difficult to discover anyone with a bad word to say about Mike Head. I am truly heartbroken by the news of his passing and I have tried to find the positive. Right now, I'm only positive that I'm sad. And that is about all I have.