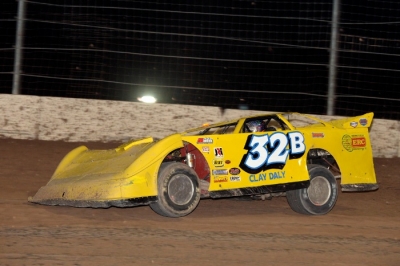 Hogge, of Salinas, Calif., built more than a straightaway lead after just half-dozen laps and appeared to be on his way to a victory at the half-mile oval, but his 360-degree spin at the top of the frontstretch — no caution flag appeared on the 12th lap — dropped him back to fifth at Daly zipped past.

The 24-year-old Daly faced a few challenges from Garrett Alberson of Las Cruces, N.M., who pulled within five lengths with four laps remaining, but the winner picked up a cushion of two lapped cars with two laps remaining and drove his Pete Van Iderstine-owned No. 32B to his first series victory in nearly two years, earning $3,000.

Alberson settled for second in the 25-lapper while fellow fourth-row starter R.C. Whitwell of Tucson, Ariz., was third. Pat Doar of New Richmond, Wis., one of several Midwestern snowbirds competing in the event, rallied from his 16th starting spot to finish fourth. Hogge slipped to a sixth-place finish behind Tony Toste of Arroyo Grande, Calif.

Polesitter Mike Balcaen of Winnipeg, Manitoba, dropped out of the top five by the midpoint and was listed 14th in the final rundown.

The feature was slowed by a single caution scrapped when tail-starting Rob Mayea of Bend, Ore., spun in turn one on the first start. Tommy Malcolm of Corona, Calif., spun exiting turn two on the white-flag lap and a second caution flew simultaneously with the checkered flag. With the safety crew slow in arriving, Malcolm’s car showed flames underneath after the spin, but he was able to climb out safely.

Notes: Daly’s Victory Circle Chassis is powered by a Cornett Racing Engine and sponsored by ERC and JRi Shocks. … Daly, the 2011-’12 WCS champion, previously won on the series March 31, 2012, at Kings Speedway in Hanford, Calif. … The feature race ended about 11:45 p.m. ... Don Shaw won the consolation race despite a flat tire on the final lap that allowed polesitter Cody Laney to challenge in turn four. Laney made contact and nearly lost control, but righted his car to finish third and transfer. … Apparent consy runner-up Rob Mayea was officially listed fourth in the consy after a penalty for jumping the last start. … The nights of Randy Brown and Dave Deetz came to an end on the second lap of the consolation race in a multicar frontstretch scrape. … Brad Pounds, who also competed in the IMCA modified division, scratched from his front-row starting spot in the Late Model consolation race. … Among other drivers failing to transfer to the main event: Carla Laney, Matt Micheli, Larry Childress, Devin Crockett, Randy Shafer, Rick Shafer and Paul Guglielmoni, who lost a left-rear wheel during the consy. … LVMS also hosts the fall’s Duel at the Desert for WoO STP Sprint Cars, but Late Models aren’t on the card. … West Coast Shootout competitors wrap up their season-opening week Saturday at Bakersfield (Calif.) Speedway.