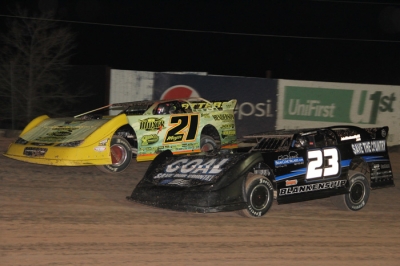 “We just got lucky and hit the setup right off the bat,” said Blankenship, who skipped Thursday’s practice and made his debut at the west Texas oval. “We’ve been fast this whole trip so far, and this time the (lineup) invert didn’t hurt us quite as bad as we thought. At least we finally got us one.”

Blankenship, who drew the fifth starting spot after winning his heat race, was up to second after the race’s lone caution on the 12th lap and used the low groove to work his way into the lead of the 30-lapper.

“I just had to start down there, so I figured I’d make it work,” Blankenship said of his chosen groove. “Once I got to second, I figured it must’ve been pretty good.”

Moyer, the Batesville, Ark., Hall of Famer who started outside the front row, quickly fell a straightaway behind and settled for second at the finish while polesitter Mason Zeigler of Chalk Hill, Pa., was third. A.J. Diemel of Elk Mound, Wis., rallied from 12th to finish fourth while fellow sixth-row starter Tim Fuller of Watertown, N.Y., rounded out the top five.

At the race’s outset, Zeigler beat Moyer into turn one, but Moyer zipped around the outside exiting turn two to take command and set sail early in the race, reaching lapped traffic after just five circuits.

With Moyer out front, Blankenship battled past Zeigler and Ryan Gustin early in the race to put himself in position to grab the lead. Moyer fought off Blankenship a few laps after the lap-12 yellow but couldn’t keep up.

“He did a good job. We really didn’t have anything for him,” Moyer said. “It was pretty good around that bottom. We could run pretty around that top around one end, but not so good on the other end.”

Zeigler, who never finished better than 22nd during six NDRL events a week earlier at Tucson (Ariz.) International Raceway, went to his backup car at El Paso and turned in his best performance of the young season.

“We just wanted to go home (after Tucson) but obviously we weren’t going to drive all the way out here and roll out,” Zeigler said. “You know, we got in a wreck early on with that (primary) car … we just tried to make it work. The best thing we should’ve done is pull this car out. We should’ve pulled it out a long time ago.”

The second of three nights of Battle of the Border action is set for Saturday at El Paso with hot laps starting at 5 p.m. MST. The Late Model feature pays $5,000-to-win while sprint cars also join the action for a five-division program.

Notes: Blankenship’s Rocket Chassis is sponsored by X-Coal Energy & Resources, Generator World, Todd Case Trucking, Fast Lane and Bear Cove Village. … Eighth-starting Garrett Alberson slipped off the backstretch on the first lap and fell far back in the pack before rallying to finish sixth, nipping Jimmy Mars on the last lap. … Eight drivers finished on the lead lap and 13 were running at the finish. ... The lap-12 yellow appeared Kent Robinson spun turn two while battling Max Blair for the fifth spot; Robinson retired while Blair retired late in the race. … David Karst scratched from the feature after his car suffered damage during pace laps. … Blankenship’s quick time of 15.261 seconds set the Super Late Model track record.