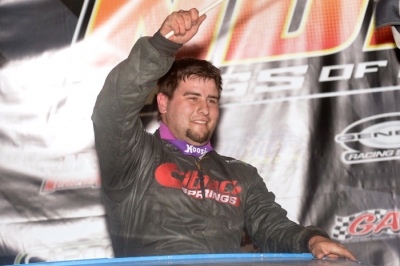 Starting from the outside of the front row, Gustin, the open-wheel modified standout who began transitioning to Late Models in 2012, grabbed the lead over polesitter Chris Simpson of Oxford, Iowa, on the start of the race and was never seriously challenged. | Complete Winter Extreme coverage

“I knew I was gonna have to beat Simpson to the first corner,” said Gustin, who earned his third straight top five in Tucson after engine issues plagued his efforts in the opening three rounds. “Once I got down there, I just tried to cruise and maintain. Normally, when it’s rubbered-up like that around the bottom, unless you completely screw up you’re not gonna get passed. I was just trying to make good clean laps and looking for lap 50 on the board.”

Gustin’s only tense moment came on lap 34 when he nearly repeated a miscue from last season that cost him a $27,000 victory in I-80 Speedway’s Silver Dollar Nationals. Much like his ill-timed mistake last July, Gustin was well ahead in Sunday’s feature when he ran into the back of Justin Kay while trying to put him a lap down.

But unlike the I-80 incident, which left Gustin’s car with heavy front-end that eventually ended his night, Sunday’s tangle with lapped traffic proved trivial. Gustin continued to dominate through the remaining distance and crossed the finish line with nearly a straightaway advantage in claiming the first $10,000 Late Model victory of his career.

“I figured the nose was torn off of it once again,” Gustin said in recalling his costly miscue at I-80 last season. “But it wasn’t and everything worked out. It was smooth sailing from there.”

Clanton briefly challenged Gustin after the lap-34 restart, but he was forced to settled for second after his car faded in the closing laps.

“His car was real good,” said Clanton, who came just one position short of repeating his victory in last year’s Winter Extreme finale. “I killed the right-rear tire because I was so tight. I was just riding the last 10 laps there just hoping to make it to the end. Luckily, we did.”

The race was slowed by two cautions. Mike Balcaen of Winnipeg, Manitoba, slowed to bring out the first yellow flag on lap 15, and Gustin’s lap-34 tangle with Kay of Wheatland, Iowa, sent Kay spinning to cause the second caution.