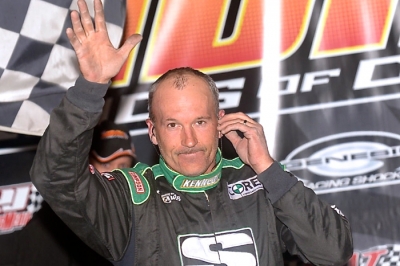 The third-starting Fuller inherited the lead when race-long leader R.C. Whitwell fell out of the race on lap 22 and later pulled ahead of a side-by-side battle with Gustin on the final lap to claim his second-career victory in Tucson’s annual six-race miniseries. | Complete Winter Extreme coverage

“He run a great race, but I wasn’t giving up,” said Fuller, who was slowed in the closing laps by damage from contact with an infield tire marker. “When he pulled up on the outside of me, I was amazed because (the track) was so black.

“When you’re leading the biggest thing is trying to not to hit the tires. You’re scrubbing them every lap. I just had to get in there good and accurate, and I knew if I could just get the right rear in the brown a little bit, I could launch off of four.

Gustin of Marshalltown, Iowa, settled for second in the National Dirt Racing League non-points event. He charged from the seventh starting spot and pressured Fuller through the final seven laps, only to push high after inching ahead in the final corner.

Polesitter Billy Moyer of Batesville, Ark., who claimed his 12th-career Arizona victory in Wednesday’s third-round feature, ran among the top three for the entire distance of Friday’s race but was never a serious contender in settling for third.

Jimmy Mars of Menomonie, Wis., charged from 17th to claim his fourth top-five finish in four events on the week, while fourth-starting Shane Clanton of Zebulon, Ga., rounded out the race’s top five finishers.

After taking second from Moyer early, Fuller kept pace with Whitwell for most of the race’s first 20 laps and made multiple looks under the high-running leader. Fuller twice inched ahead of Whitwell in turns one and two, but Whitwell powered the high side of turns three and four to twice pull back out front.

Fuller assumed the lead after Whitwell dropped out on lap 22, but he soon had to deal with Gustin. The two drivers ran side-by-side for most of the race’s final three laps before Gustin inched ahead with a hard charge into turn three on the final circuit.

The track’s slight cushion couldn’t hold Gustin’s momentum, and he pushed high exiting turn four. Fuller remained steady on the bottom to pull ahead for the victory.

“I just messed up there that last corner,” said Gustin, who notched his first top-five finish of the week. “I should’ve cracked it a little more instead of trying to drive in there wide open and carrying too much momentum, hit the cushion and push. That’s on the driver tonight, but these guys did a great job getting the car going.”

Whitwell, the Tucson driver who on Saturday became the first home-state racer to win during Arizona’s annual stretch of January special events, turned back multiple challenges from Fuller and Moyer through the first half of the race and began inching away from Fuller just before lap 20.

But his hopes of becoming the week’s first repeat winner were dashed when sparks flew from beneath his car and he slowed in turn four just before completing lap 23. He was pushed to the pit area and settled for a disappointing 19th-place finish.

“It’s a bummer. You don’t get many chances to start up front in these races,” Whitwell said. “We had all our ducks in a row and had a perfect group and perfect (qualifying) session. Everything was just going perfect tonight, and that’s why we got to the front. You got to have awesome luck, and we did until that point.”

Notes: Fuller drives a Clements-powered Capital Race Car for Kennedy Motorsports with sponsorship from Core Construction, Kennedy Partners, Keyser Manufacturing, Regeneration Finance, IronCo Enterprises, B3 Architecture and Signature Paving. ... Moyer, Mars and Diemel are the only three drivers to make all four Winter Extreme features. ... Travis Dickes of Madison, Neb., was leading the sixth heat race before slamming the turn-three wall midway through. ... Chase Junghans of Manhattan, Kan., was the fastest qualifier in group six but didn’t make the main event after dropping out of his heat race. ... NASCAR Truck Series driver Matt Crafton of Tulare, Calif., made his appearance of the week but was caught up in a consolation race wreck that collected Lonnie Parker Jr. ... Parker of El Mirage, Ariz., also made his first appearance of the week. ... Ricky Thornton Jr. of Chandler, Ariz., won the modified feature. ... The Winter Extreme continues Saturday afternoon with round five of the six-race miniseries. DirtonDirt.com is providing live video coverage of all the Winter Extreme action.